So what’s changed in Abidjan since I left in 2013?

One of the first things I noticed upon my arrival in Abidjan was how much cleaner it was. Shortly after my departure in 2013, the government forbade the use of plastic bags. As I mentioned in this post on Ghana, similarly in Abidjan everything went into (sometimes two!) black plastic bags, whether you were buying bananas, fried chicken, or groceries. Though not all plastic bags were deemed unauthorized, and though not every city is in compliance with the law, the results in Abidjan seem to be pretty clear to me: the grass on the side of the road is less littered with garbage and the open sewers swell less with black plastic.

Last rainy season, several neighborhoods experienced severe flooding, but in particular shantytowns in Cocody were especially hit: 39 died in the shantytown known as “Gobelet.” Those who have been to Abidjan before 2014 have seen this shantytown if they have ever made the trip between Riviera and II plateau as you probably crossed through Gobelet on your way to rue des jardins. It certainly is a precarious zone to build a neighborhood as it is crisscrossed by a creek and the valley does not look stable enough to hold homes. So, in July 2014, these folks were evicted (offered around $300 to skedaddle) and the shantytown completely demolished. It now looks like this:

3eme pont, 3eme pont ! Alright, I was super excited to see and drive across the third bridge, named affectionately for former President Henri Konan Bédié (see photo below: perhaps to appease him so he would not run against current President Ouattara in October?), and whose construction made traffic a nightmare on both sides of the lagoon when I was here last. It lives up to expectation, I’d say: a futuristic traffic interchange precedes it in Marcory, then you have a long stretch of highway with signs that look as if they are lifted directly from the French autoroute. The bridge itself is long and straight, several lanes but rarely crowded because of the 500 FCFA ($1) toll one must pay when crossing both ways. The toll stations are the same as one would find in Europe, and they even have exact change! The bridge pops out on the other side near the infamous Golf Hotel (this is where Ouattara camped out during the election crisis; and where I saw Stromae last weekend in concert). It makes a more direct route between the airport and my neighborhood, as well as direct access to several embassies.

The other infrastructural feat to occur since my departure is the Riviera 2 rond-point. This is connected to the bridge, and during my stay in Abidjan, the traffic caused by the construction was particularly horrendous. Well, they have finished the work and made quite a nice traffic circle; the problem is that it did nothing to improve traffic conditions… it perhaps made it even worse as cars can no longer speed through this area now regulated by traffic lights (and the occasional police officer – yesterday I saw a lady cop giving a Gbaka driver a piece of her mind for running the light!) 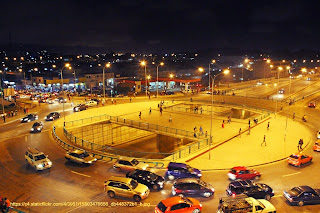 These changes may be seen as positive for the president as he attempts to build up political support for the elections in October (well, maybe not evicting the shantytown dwellers). However, not everyone is impressed with Ouattara's "concrete" achievements: LIDER, an opposition political party, posted this on their facebook page (rough translation below):


"In saying that Ivorians want something "concrete," Ouattara must have been thinking about the English word, "concrete," which would explain why he has exclusively focused his presidency on constructing things out of concrete. What's concrete for Ivorians is the high price of electricity, power cuts, the state of disrepair in the hospitals and clinics, the piling up of heavy arms by the rebels, pharmacies lacking medicines, a bridge that charges too much and is not profitable, high taxes, partial justice, increases in the cost of living, corruption and a partisan electoral commission...We are Ivorian and the only thing we expect concretely from Mr. Ouattara is that he puts into place democratic conditions and transparent and credible elections."

These are just my initial thoughts as I close out the first week of my return to Abidjan. More insights to come!

Posted by Justine at 8:46 AM No comments:

Here we go again! I'll be in Côte d'Ivoire from May 20, 2015 until July 27, 2015. This time I'll be carrying out a research project on election preparation and voter education programs in the run-up to the October presidential elections. These elections will be the first since the 2011 post-election crisis, when the country fell into months of violent conflict after both incumbent and opposition candidates declared themselves winners, leaving over 3,000 dead.

I'll be based in Abidjan, but hoping to travel with the Civil Society Coalition for Peace and Democratic Development in Côte d’Ivoire (COSOPCI) as they put on voter education campaigns and register voters throughout the country.  We'll be developing and conducting a survey in Abidjan about the elections and on citizens' perceptions of democracy promotion. This research is supported by grants from the West Africa Research Association and the Human Rights Center at UC Berkeley.

I am excited to return in a different capacity (as a researcher and as a PhD student) and to see how much has changed (or not!) in Abidjan.
Posted by Justine at 6:39 PM 1 comment: