I gave a guy a car and got a box of quail eggs! And other stories of first few days in Abidjan


I can already see that this West African experience will be quite different from my other adventures. Here’s why:

1.       Accommodation: I and two other Fulbrighters are staying in a very secure, nice, new building in the Riviera III neighborhood (not far from the U.S. Embassy). My apartment is air conditioned, with hot water and NOT cheap (my rent here will greatly exceed what I paid in Paris!), but it’s not easy finding secure, cheap, furnished housing in Abidjan, so I will take what I can get. 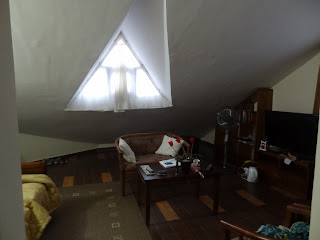 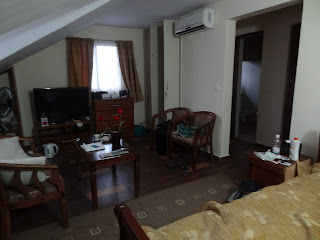 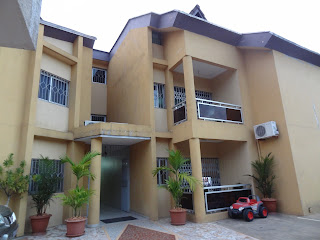 2.       Work: on Tuesday, 18 Sept. I went for the first time to the Ministry of Education, Pedagogy and Continuing Education Department, where I will be spending the next 10 months. It is located in one of the many sky scrapers of Abidjan. The building itself is a bit dilapidated, as it and its neighbors were attacked during the election violence in 2010-2011 (i.e. windows are shot out, some offices were clearly burned and never repaired, water is dripping from somewhere into the lobby, etc). The elevators are so slow and come so intermittently that there are chairs on each floor for you to wait. But, I’ll have a nice office (not finished yet) fully equipped and ready to go (I’ll even have my own toilet!). 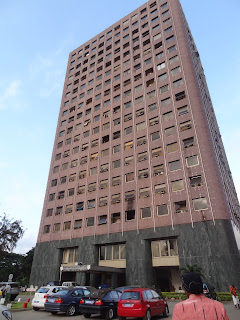 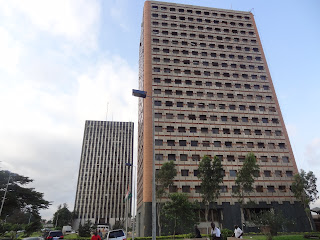 This department (henceforth referred to as DPFC) just launched a new national curriculum, so they are now in the process of training teachers (already 3 000+ have been trained) and communicating the new strategy across the country. One new element is the EDHC (Human rights and citizenship education), which is exactly the type of curriculum I would like to work with. We’ll see.

Another interesting project is the teaching of local languages at the elementary school level. The idea is that students will be better integrated into the system if they start off by learning how to read/write in their mother tongue, and then slowly progress to French education. They have already had success in an initial pilot program (in classic schools, 73% of students advance, whereas in the pilot program 83% continued onto middle school).  The director of this program was really nice and already invited me to her home for Tabaski (Muslim celebration)! 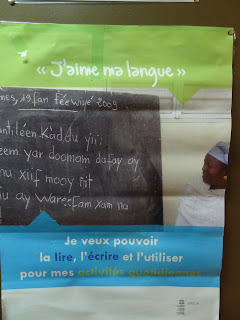 On the first day, I met with my director and we discussed possible avenues for me. This followed a lunch with the deputy director, who then told me we were going to visit the lycée Classique (high school). I thought we were going to check out the training program for new teachers. When we arrived, there were hundreds of people lined up on the street clapping. Come to find out, it was actually a ceremony involving the Minister of Education, Madame Kandia Camara and World Bank officials, who had provided materials and several vehicles for the various school districts (many cars were stolen during the conflict, so administrators were unable to get around to visit/inspect the schools). It was a big affair with music and I even participated by symbolically handing the papers for one car to one of the district directors (Minister Camara thought it was a good idea to include l’américaine!) We then had a reception with the principal of the high school who explained that a student association had been raising quails all summer in order to sell the eggs as a business venture. He gave three boxes of quail eggs to Minister Camara, who then gave me a box! Apparently they are really good for you, if you drink them raw in the morning, several a day (haven’t tried that yet!).

In short, the first day was an exciting whirlwind of meet/greet (I met all the different curriculum heads and other important people) and official stuff. I learned my lesson, always bring my camera to work, you never know when I might do something cool like give someone a car! (I might even be on tv or in the newspaper!)

The second day was just as interesting, yet less official. I attended a seminar on using cell phone technology for statistics gathering in education. It is a new program, to be tried on schools here in Abidjan with the support of Orange (cell phone company) and Microsoft (who is making the application to be used on Windows phone, presumably) and UNESCO. It was really interesting to see how technology can be used in this capacity, and especially since Orange had successfully run a similar program in Senegal involving birth registration by cell phone. Since so many people have cell phones (and there may not even be roads in the villages!) it is an efficient way to transmit information over distances quickly. Getting the stats to the Ministry of Education will help them develop programs, find out what the schools need, etc. This idea, of integrating technology into education, seems to be really important to my boss, so maybe I will be working on these types of projects too?

3.       Daily routine: Riviera III is pretty far from Plateau, where I work, but the traffic is ridiculous and makes it even worse. Therefore, the people in the DPFC start at 7:30 to avoid the traffic and leave at 16:30. It’s going to be a very early start for me! This is a change from classes in Senegal or Ghana, which weren’t so early or every day.

So that’s that. Things have started off really well: I am making quick friends with the other Fulbrighters and have met a ton of cool people through work, especially the seminar on technology. So far everyday is a surprise, and I like it that way!


On 15 September, as a   2012-2013 Fulbright Public Policy Fellow,  I will be headed to Abidjan, Côte d'Ivoire to work with the Ivoirian Ministry of Education on public policy issues.

I am super excited about this position and can't wait to find out what exactly I will be working on! You can follow my experiences here.

Posted by Justine at 5:06 AM No comments: