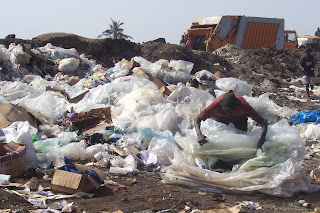 On Saturday we went to the trash dump (the only one for the entire Dakar area) for environment and development class. Land fills are all over the world, used by countries as a way to store material waste. However, this particular area, Mbeubeus, is both interesting and disturbing. More than 300 trucks dump trash (all kinds of trash that hasn’t been sorted) a day at the dump where 800+ people call home. That’s right, there are people living in the dump. Their houses are actually in the midst of the trash. Most of the people that live there sort the trash in order to make a profit on what they can find (i.e. re-sell glass bottles back to companies, plastics to be recycled, weaves to be re-made into useable hair). It may sound like a good system of recycling, until you realize that toxic and industrial trash is dumped here as well, putting the people at extreme health risks. The doctor in the village said that many people come in with respiratory diseases and infections from cuts that they received sorting through the muck. We were wearing masks, but we could still smell the stench and possibly the toxic air that these people breathed in every day. There was absolutely no state management of the dump; there were places where the trash was stacked three to four times our heights. Right beside the mountain of trash were cultivated fields. The trash itself pollutes the water table which in turn affects the vegetation around, let alone the drinking water of the population. I won’t forget when we walked past a stream of multicolored liquid in the middle of the dump that was on fire. That wasn’t water, folks. There was a boy who was 13 years old and who had been sent by his parents to Mbeubeus to work, alone, five days a week. He was supposed to send money back to his family. There were little girls, barely 8, sifting through stacks of old clothes and carrying bags of garbage to be sorted. It was dusty; it was smelly; we had no idea what we were stepping in (or on). What was most remarkable to me (besides the people working in the trash dump) was the amount of trash a city can make. When you throw something in the trash, you forget about it. It gets picked up by a truck, and you never think about it again. But it has to go somewhere. It really makes you realize how wasteful society is. And here they recycle everything from clothes to plastic bottles before they throw it away, so to see that much trash…it makes you think what a landfill in the US is like (though we have decent recycling plants and there aren’t people living in dumps, but still).
After that we headed to a depression where people are living. A depression is where the land has fallen and is very close to the water table. This is a very unsafe place to live because depressions are very susceptible to floods. But, because of this, it is very cheap land. We saw a house which had been flooded recently and been overrun by vegetation. The water is a murky green because of a high concentration of nitrates, which are harmful to humans. Just outside of the village were about two dozen tents: for the refugees that had lived in the village but had been flooded out. Because of higher amounts of water in the village, malaria and cholera are huge problems. People have to keep re-building their houses because the water destroys them or they sink into the depression. To say the least, this is not a good situation. 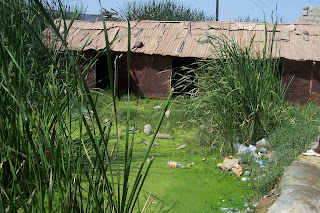 Saturday night, we went to a discotheque s’appelle Nianey. It was a lot of fun, minus the slow techno music, but it was also an interesting experience. First, there were these mirrors, and I could not understand why people were dancing, by themselves, in front of the mirrors. It was like, can you be a little more conceited? Haha. Second, let’s discuss Senegalese music. It’s different from dance music in a couple of ways. There is the singer, who is usually singing slowly. Then there is the music played by the guitar and keyboard, which is the same rhythm as your typical dance hit. But then there are the drums. They are out of control majority of the time, making their own beat that doesn’t really match up with the rest of the song. You’re real confused: do I dance to the singer, which would mean extra slow, or do I try to keep up with the drumming or what? And Senegalese dancing is the entire body, involves a lot of movement, and many times jumping, which is definitely a workout. And for some reason, always when Senegalese are dancing in music videos, they have this huge grin on their face and make it look so easy to make your legs and hips do impossible things. We try to mimic, but I don’t think we have it down quite yet.
Posted by Justine at 5:52 AM 1 comment: