Adventures from the North 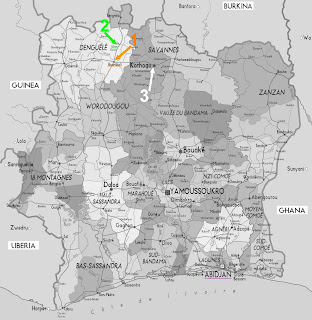 I referenced here the inequalities that existed between the North and South in relation to education, so I was excited to spend five days in this region of Côte d'Ivoire. 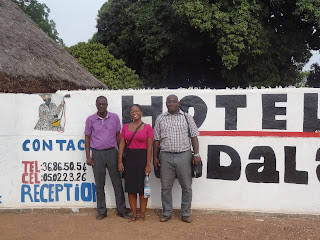 Our first stop was 731 km from Abidjan. A quiet, not very crowded city er, more like a village, Boundiali was welcoming. There were very few cars in the city; everyone rode motorcycles or bicycles. The roads weren’t paved, just dusty, red passageways. We stayed at a hotel called le Dala, which was inaugurated by Houphouet-Boigny in the 1970s. It seemed like the hotel hadn’t been repaired or upgraded since then either… upon arrival, the porter told me there was TV in my room, but neglected to mention that there was no running water (in all of Boundiali, apparently!). 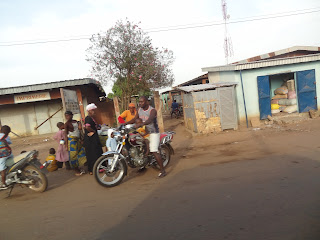 At first, I wasn’t certain why we were visiting this town, 30 some km from Boundiali. But I later found out that it is the Minister of Education’s native village and they wanted us to see it. We only spent the morning and part of the afternoon here, but like Boundiali, nobody drove cars and everything was coated in a red dust. 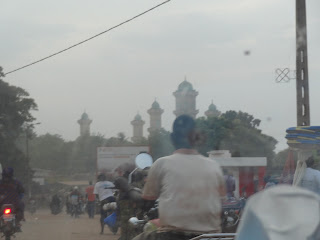 Korhogo
Two hours from Boundiali, we found ourselves in Korhogo. Like the other two cities, no taxis, so we had to take moto-taxis to get around. The President has a residence here, because his home village, Kong isn’t so far away. We didn’t have much time to explore Korhogo, but it seemed like an interesting city, if one could get over the outrageous temperature of 47 degrees Celsius. 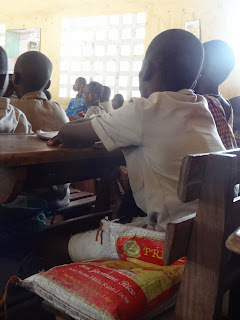 I visited the north with two colleagues: the National Coordinator for EDHC (CND) and the CND for primary schools/CAFOP. It was pleasant to travel with both of these gentlemen, as they were equally enthusiastic about EDHC and went over and beyond the expected workload by holding open sessions for teachers with complaints and questions in addition to the class visits.

In total, we visited six schools: Two elementary schools, three high schools, and one CAFOP (teacher training college). Each visited (with one exception, see below) consisted of us attending an EDHC lesson with other EDHC teachers from the school present, followed by a session of feedback and capacity building for the teachers. 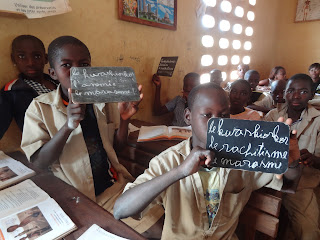 We quickly noticed a trend: most, if not all, of the teachers had yet to receive the new curriculum, available since September. However, we did have one principal admit that he had received the programs on a USB key, but hadn’t distributed them to the teachers. Or administrators said they had the program, but didn’t want to waste precious resources printing it for the others. This complaint, that the DPFC/MEN are not directly providing materials to teachers, was probably the most frequent. Even though they had the resource at their fingertips, many complained that they should have been given their own hard copy, instead of having to print it or copy it. When asked, well if you aren’t teaching from the curriculum, what are you teaching from? Teachers responded that they used the old ECM textbook, which doesn’t present a huge problem, per se, because the content is similar, but it frustrated my colleagues who have been pushing for the APC teaching methodology.

As mentioned in my post about Yamoussoukro and Bouaké, the biggest teaching strategy problems we saw were at the middle school level. Once again, dictation prevailed as a teaching method, despite the importance of participation in human rights and citizenship learning. In a lesson on entrepreneurship for 9th graders (many of whom are old enough to start their own business!), the teacher dictated the steps necessary to starting a business, including (but not defining) conducting a market study and a feasibility study. Students copied down what the professor said, but when I asked them pointedly how they thought this particular lesson would apply to their daily lives, many said it wouldn’t/didn’t concern them. Without directly engaging the students, they treat EDHC just as another boring lesson, which of course won’t facilitate behavior change, the main goal of EDHC teaching. 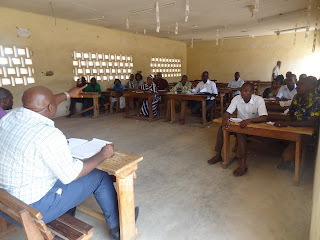 My colleagues were frustrated, and reiterated the importance of using interactive teaching methods, such as group work, brainstorming, field trips, class projects, etc. Some of the teachers reacted positively, while others crossed their arms and rolled their eyes. I told them that I understood that they were sometimes obligated against their desires to teach EDHC and perhaps weren’t motivated to come up with interesting teaching methods. I suggested that they work with the other EDHC teachers to come up with lesson plans, thus alleviating the burden of planning for EDHC on top of their other work. I hope they will take this to heart…

There were two events that surprised me during this trip.

First, we had a bit of a conflict with one of the EDHC teachers in Gbon. As we were visiting two schools in the city, we arrived a bit late for the open class in the Gbon middle school. Instead of waiting for us, which the principal told the teacher to do, the EDHC teacher released his students AND told all of the other EDHC teachers they could go home because “we were not coming.” Thus, when we came, there was literally no-one there. We were shocked. We hadn’t made the trip from Abidjan for our good health; we came to provide support to these teachers, who were constantly complaining that the MEN was neglecting them, and instead of waiting 10 minutes, they chose to leave. When the teacher in question was called upon, he shrugged his shoulders. The principal called all the teachers back, many of whom sat with their arms crossed during our session, complaining that the DPFC didn’t provide them with the proper materials to teach the lessons. We pointed out that as teachers, it’s part of their job to seek out interesting materials to be used creatively, and that we provided everything they needed as far as methodology and curriculum are concerned… what more did they need? 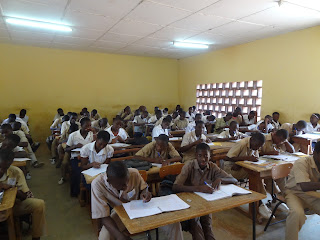 The second event was a positive one. At the Houphouet-Boigny high school in Korhogo, I gave my surveys to a class of 9th graders, but for the first time since I have been conducting it, the teacher was not present. I think this allowed the students to feel more comfortable. When I told them they could ask me five questions after they finished, I expected mundane, teenage questions, such as “Where in the US are you from? Are you married? Have you met Beyoncé?” Instead, the students floored me with their extremely thought provoking questions directly related to EDHC: Do people who conduct awareness raising campaigns actually practice what they preach? We talk a lot about reconciliation, but then why is there still war in the world? How do I convince my neighbors that respecting vulnerable persons (handicapped people was the example) is the right thing to do? Why do we talk so much about human rights, but when the genocide in Rwanda went down, why did no one intervene? And finally, why do western countries talk about legalizing gay marriage? 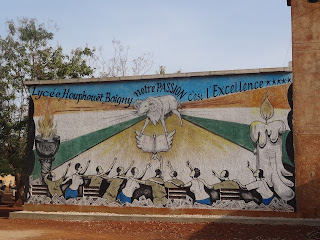 I can’t say whether it was the doing of their EDHC professor or just their own interests, but these kids were obviously really reflecting on these issues. I tried to respond as best I could, but I found the whole situation refreshing… maybe, despite our worries for the teaching methods employed, EDHC was taking root in the students’ minds?

To arrive up north, we took “cars” or large 60+ person buses. I had a window seat, which wasn’t so bad as a cool breeze kept me somewhat comfortable. Considering that the drive from Abidjan to Boundiali took 12 hours, meant that my bum was a little sore from the metal/barely-covered seats. Under my feet were several guinea fowl in a box and they were more than loud and obnoxious. Not to mention they kept touching me, and I found myself wondering, when was the last case of bird flu again? On the way to Boundiali, we were “protected” by a Dozo (traditional hunter) who was sitting just behind the driver. Every time we drove through a checkpoint, he slowly lifted his hand, and we were allowed to pass. Dozos are believed to have magical powers because of their secret rituals in the sacred forests, and they played a pivotal role in the conflict. I am thankful he kept us safe on that ride though, especially when we would hit nasty bumps. 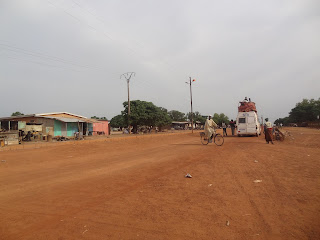 The road between Katiola and Korhogo was horrible. Huge pot holes made it so that we had to literally drive on the side of the road, often times tilted at seemingly unsafe angles. We saw some trucks that had flipped and I was appreciative when our driver took the bumps slowly.

On both the buses there were individuals who got on at a certain stop to sell us their cure-all medicines.
They would ask the passengers if someone amongst them had malaria, and would give one “volunteer” a little of the medicine. They would, of course, immediately feel better. My colleague seated next to me grumbled about how we wanted peace and quiet on our ride home, so I figured many of the others on the bus wouldn’t buy this stunt either. Surprisingly, though, many people listened intently to his diatribe about how the medicine could, if you took three bottles, cure you of paralysis, unblock fallopian tubes and facilitate pregnancy, and cure you of fatigue. Several bottles were purchased at a “special” low-rate just for us on this particular bus. Right.
Posted by Justine at 1:46 PM No comments: