What ARE you doing in Côte d’Ivoire?


I have been in Abidjan for two months now, and so I think it’s fine time to explain what it is exactly I am doing during my Fulbright fellowship with the Ivoirian Ministry of National Education.

First, here’s some brief background info regarding the education system in Côte d’Ivoire.
The structure of the system is based on the French model (basically école primaire = K-5, collège = 6th-9th, Lycée terminates with the Bac at the end). School is free until high school, after that it’s 6 000 CFA per year ($12). Unlike France, there are no school buses or school cafeterias. Some of the problems facing the school system here include: lack of paid professors, no materials in classrooms, too many students per class, etc.
In villages, there is sometimes only an elementary school, so students have to commute to larger villages to attend middle school. Many times, they stay with family or a tuteur during the week so that they can be closer to the school. One of the projects that the DPFC is working on is the construction of collèges à la proximité, where elementary school teachers would be trained to teach at the middle school level as well, to prevent students, particularly girls, from having to travel to school. There was an increase in the number of teenage pregnancies associated with the tuteur system, so they are trying to alleviate this problem.
School is also taught in French, the national language, although there are moves to integrate local languages into the schools, particularly in rural areas where students’ parents might not even speak French (see blog post about this here).

As I mentioned previously, I am working in the Direction de la Pédagogie et la Formation Continue (DPFC), which is responsible for producing the national education curriculum and training teachers from the primary to secondary levels. The staff is all former teachers and they work hard and long hours. Especially now, as the Ministry of Education has just launched a new curriculum that is slowly being introduced in schools. The content has not changed, but the way that the material is taught has, thus teachers are going to need new training and new curricula. They have decided to move from Pédagogie par objectifs (PPO – Pedagogy by objectives) to Approche par compétences  (APC   – the skills approach, which is more in line with the Anglophone model of teaching; student ability- centered). The reasoning behind this is to bring the Ivoirian education system more in line with other Francophone countries in Africa, who have already made this change.

Of course, there has been a lot of pushback regarding the shift, as teachers argue that a) there isn’t much of a difference between the two strategies, and b) they won’t ever be trained in the strategy (due to budget constraints, timing, etc), so what’s the point in changing. The DPFC, thus, has to go defend the change and has put a lot of people on the ground to train trainers to get the word out there on the new approach. I have attended some of these meetings/trainings and have heard some of the complaints, but also have seen that people seem to be pretty receptive (and they don’t have much of a choice, they will be evaluated based on the new program at the end of the year, not the old one!)

Another important change to the curriculum this year is the shift from Education civique et morale (CM, Civic and Moral education) to Education de droits de l’homme et citoyenneté (EDHC, Human rights and citizenship education). The change actually started in 2009, with emphasis placed more on human  rights than had been previously, but the program wasn’t elaborated/published until this year. Since the program is new, there is a lot of buzz around it: what makes it different from CM? Is it necessary? What should the content be? How do we teach it? Who teaches it? How will teachers be trained? Are they (both trainers and teachers) doing a good job? Are they teaching it using the APC? Does it correspond with international and regional norms?
So here’s where I come in. I get to participate in the training of professors on EDHC, evaluating their performances/approach, and critiquing the actual content of the new program.
I have already read through the curriculum, attended some training seminars, and now have visited two schools to sit in on lessons. I expect to continue to do this, with some exciting opportunities coming up that include: attending a training seminar by ECOWAS (Economic Community of West African States) on their newly confirmed Peace Education Manual, seminars and trainings hosted by UNESCO, and visiting schools all over Abidjan and the interior of the country. 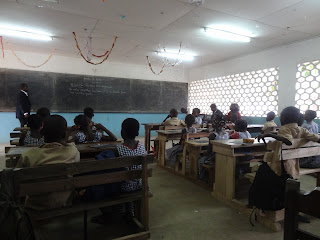 In August, the government signed into law the creation of EDHC as a subject in schools. Currently, there are no teachers who are specifically dedicated to EDHC; instead, professors of all disciplines may teach the curriculum. It depends on how many hours a teacher has within their own discipline (if they don’t have enough hours, they supplement them with EDHC courses) and sometimes teachers volunteer to teach EDHC on their own.

This presents a major dilemma: those teaching EDHC have no training related to the curriculum. This is going to change since EDHC is now an official subject and will be taught in teacher colleges for future professors, but for now, anyone could be teaching the material: a math teacher, a history teacher, a German teacher. Even those in charge of the program with whom I work, though they are excited and committed about teaching EDHC, are not formally trained in human rights education.

The content of EDHC can be broken down into three main components:
Human rights education and civic education: varies from learning the various international instruments on human rights (international convention on rights of the child, for example) to making sure you vote and pay your taxes to learning the lyrics to the national anthem.
Taking care of the environment:  the importance of clean water, not polluting, etc.
Health: the fight against HIV/AIDS, puberty, , don’t do drugs, teenage pregnancy, etc.

To help with the problem regarding lack of training, the DPFC issued a guide to go along with the curriculum sent to teachers, which includes specific information necessary to teach on the topics above (for example, for the lesson on instruments and mechanisms to protect vulnerable populations from violence, the guide has a list of all the international conventions related to vulnerable populations, definitions etc). However, with no textbooks produced on the subject as of yet, plus constant revisions still ongoing, I can understand why some teachers may find it hard to convey what it is they are expected to regarding the curriculum.
Now that you know a little more about it, I will start to write more posts on some of the observations I have made during classroom visits and the experiences I have in trainings. It is an exciting time as the curriculum is more or less brand spanking new, plus it has already been heralded as extremely important part of the national curriculum by both the Minister of Education and the National Assembly. It’s a great opportunity to see it being put into action.
Posted by Justine at 4:17 PM No comments:


The end of October brought us two holidays: Tabaski and Toussaint, which gave us two days off work and a chance to get some real cultural experiences while here.

Tabaski, the name of Eid al Adha in Francophone African countries, is one of the most important Muslim celebrations. Muslims are estimated to make up at least 40% of the population in Côte d'Ivoire, so the day is off from work. And a good thing too! Tabaski celebrates the sacrifice that Abraham made, when God asked him to sacrifice his only son. Since Abraham was willing to do it, God spared him and allowed him to sacrifice a sheep instead. Hence, Tabaski is the "sheep ceremony." Sheep were in high demand this year, and because many of the sheep come from the Sahelian countries (such as Mali, currently plagued by a rebellion and political crisis) the costs were exorbitant as the fête approached (upwards of 700,000 franc CFA = $1,400!!) You are supposed to slaughter the sheep after morning prayers, and then eat it all that day. That means inviting people over to help you finish it and sharing it with those who cannot afford to buy their own. 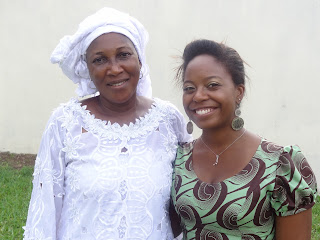 We were invited to a Tabaski celebration at a colleague of mine (see post about my arrival here, I mentioned her invitation). She was very welcoming, and served up heaping plates of fonio, a grain from the north, and sheep stew. It was delicious. 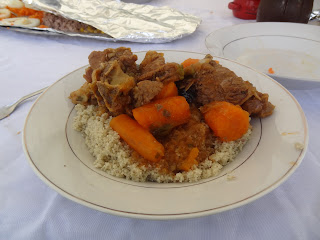 After eating, my colleague and her friend who had stopped by showed us how to do a dance that was associated with a song released shortly after Ouattara's win. It was the Ouattara Cucu dance! 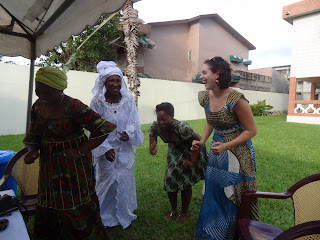 The following week, we had the day off to celebrate Toussaint, or All Saints Day, A Catholic celebration. Instead of heading to the église, we went to the beach! Direction: Grand Bassam to see part of the Abissa celebration.

Abissa is a yearly festival by the N’Zima people that lasts the entire last week of October. The N’Zima are part of the Ashanti ethnic group (yes, from Ghana, consider that it was at one time a huge empire that stretched across West Africa!) and living in the coastal areas near Grand Bassam, the old colonial administrative capital of Côte d’Ivoire. The city itself is quite beautiful; run down colonial mansions and buildings, remnants of the French colonial order. Grand Bassam is about an hour from Abidjan, so we headed that way with some Save the Children friends, ate lunch on the beach, and then headed to the Abissa festival around 3.

According to this site, “During this festival, social barriers are lifted and ‘anything goes.’” This was so very true; there were tons of men dressed up like women! (the whole get-up: big butts, boobs, wigs and dresses!) Women wore jewelry fashioned out of household items: match boxes, condoms, kola nuts, cigarette boxes…
Abissa is also the moment to publically denounce any transgressions one has committed, to confess to any wrongdoing (even the chiefs participate) and to bring about social harmony.

Check out some of the videos and pictures I took here: Abissa .

We didn’t stay long for the ceremony, but the music was enthralling, the dancing was impressive, and the cross-dressing men were just hilarious.